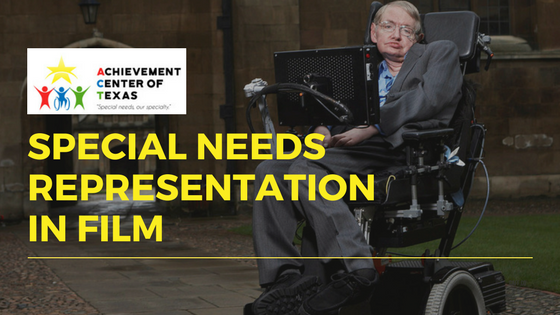 The Best Years of Our Lives, Children of a Lesser God and Forrest Gump are all moving, Oscar winning films spanning across the past century. They’re all about disabled individuals overcoming great obstacles with all odds stacked against them. The presence of disabled individuals in film has exposed viewers to new perspectives, shaping their understanding of individuals with disabilities.

The media is greatly responsible in shaping our perspectives.

What makes a good film with special needs representation?

In order for a good film about special needs to be effective must also present an accurate portrayal of its characters. It should be sure to get their abilities right. It must portray their struggles but also highlight their strengths. However, it must also avoid exaggerating either of the two as well.

Special Needs Representation in Film - The Theory of Everything

The Theory of Everything makes for a good example of a movie that focuses on a more accurate, three-dimensional view of an individual with a disability.

The Theory of Everything is an intimate reflection of the life of Stephen Hawking, a renowned theoretical physicist who suffers from a debilitating condition. The Golden Globe Award winning film reveals the effects of Hawking’s Amyotrophic lateral sclerosis on not only himself but also on his relationship with his wife Jane.

While showing Hawking’s fight and struggles, the film makes sure to show the ups and downs of his relationship and his own aspirations. While highlighting Hawking’s contributions to the science world, the film makes it known that Hawking is so much more than his disability.

In the film, Stephen Hawking was depicted by British actor Eddie Redmayne. While Redmayne himself is able-bodied, he spent a significant amount of time preparing for the role.

His preparation included working with a choreographer to learn to mirror Hawking’s speech and movement. To learn how ALS progressively deteriorated Hawking’s abilities, Redmayne even crafted a chart as a reference point during filming. Redmayne also spent four months studying Hawking’s life.

Along with his acting talent, Redmayne’s efforts were appreciated as the Huffington Post said, “In large part, his acting is remarkable for its realistic portrayal of ALS.”

The UK newspaper, The Independent even recorded Hawking himself saying “I thought Eddie Redmayne portrayed me very well. At times I thought he was me. I think Eddie’s commitment will have a big emotional impact” after the film’s premiere. The physicist even shed a tear when he first saw the film.

While Redmayne was sufficiently prepared to undertake the role, he is still an able-bodied actor.

Since his character is disabled, controversy arose among critics tackling the issue. The Telegraph writer, Rob Crossan, who himself has a disability, wrote, “The performance is the latest in a long line of what detractors call ‘cripping up’: able-bodied actors taking on disabled roles, which some critics find as deplorable as the thankfully outdated practise of white actors pretending to be black.”

Opportunities are taken away from disabled actors

The situation worsens as, according to a study released by Ruderman White Paper, 95% of characters in the top ten television shows are portrayed by able-bodies actors. When even those roles are given to able-bodied actors, the roles actors with special needs can play are limited even further.

American producer and writer Scott Silveri said about casting able-bodied versus disabled actors for special needs roles: “Because [able-bodied actors] have that specific point of view, you get a little taste of it. [Special needs actors] have their specific and unique experience through which you can tell really universal stories, but there’s a little kernel of something different.”

Actors with disabilities may be unable to perform certain roles

However, it must also be understood that some individuals with special needs do not have the abilities to play their film counterparts. For example, in The Theory of Everything, Redmayne was required to play Hawking’s character both before and after his ALS diagnosis.

The movie was meant to chronicle Hawking’s personal life as his condition progresses. Hawking himself or another individual living with ALS could not play the role as they would not have the physical ability to play the character before his diagnosis.

In situations like this one, it becomes necessary for able-bodied actors to play characters with special needs.

The same holds true for individuals with mental disabilities who are unable to memorize lines. Additionally, people with special needs are sometimes unable to understand the fictional mindset that is required for actors playing certain roles.

Individuals with special needs may not want to pursue acting

The special needs population is also relatively small, compared to the able-bodied population. This means that there may also be fewer disabled actors to begin with.

Not all individuals with special needs want to act in the first place. They may want to venture out and explore different career opportunities. These circumstances may call for able-bodied actors to take on the roles of disabled characters as well.

Still, if there are actors with disabilities who are willing and able, they should be given special needs roles. This is especially true as they will be able to play a genuine likeness to their characters.

At the end of the day, it's most important to incorporate more special needs characters in film.

The media shapes our ideas of normalcy and teaches us how different people, things and actions are treated and interacted with. The media helps develop the prominence of people with special needs.

Michael Barnett directed the documentary-film Becoming Bulletproof. The film chronicles the story of a group of disabled and non-disabled actors coming together as part of an inclusive arts project. The goal of the project was to make a short movie in the California desert, a mini-western called Bulletproof.

Barnett said of the film, “We wanted to make an exceptionally humanizing film, and to start a conversation about how disabled people, rarely seen on screen or in our media, are excluded from our wider culture. Why? And what are we missing when we reduce our human diversity?”

There need to be more films focusing on people with disabilities in order to increase their presence.

People with disabilities should not be hidden from the world but rather embraced. With increased media presences, people can learn more about disabled individuals  and their lifestyles. Special needs individuals have the same aspirations as everyone else and deserve the same opportunities as their able-bodied counterparts.

What you can do to help improve special needs representation

At the Achievement Center of Texas, we work toward greater independence and a more satisfying way of life. We want to help individuals with special needs reach a level of independence where they can achieve their aspirations.

We want them to know anything can be possible for them, even acting in major, Oscar-winning films.  Individuals with special needs have a lot of share with world. We believe they should be provided the resources and opportunities to play the roles they want to play both in film and life.

If you are a parent of a child with special needs and want them to know that their disability does not define them, please enroll with us at the Achievement Center of Texas. We would love to have your child at our center, where they can find the self-confidence to discover their talents.

At the Achievement Center of Texas, we are here to cater to the unique needs of children and adults with special needs and to equip them with the independence and creativity to pursue their passions.

To enroll in Day Care, Day Habilitation or one of our fun, extracurricular classes, please click the button below.

Help us make a difference.

As a 501(c)(3) nonprofit organization, the Achievement Center of Texas is genuinely dedicated to helping our students grow and develop. You too can help our students learn the skills to pursue their dreams by donating today!

In addition to cash, we also accept donated items. Anything, no matter the amount, can make all the difference for our students.

Meraal Hakeem is currently pursuing a Bachelor of Arts at the University of Texas at Austin. In her free time, Meraal enjoys reading, writing and volunteering with various organizations to raise awareness of different human rights issues present in her community.

Special Needs Representation in Film
The first time you visit this site, a browser cookie is generated to identify you as a new visitor. If you were referred to this site by another site, the referral URL is also tracked in a cookie. This allows us to create customized messaging and notices for each of our site visitors. This data is retained in your web browser until cleared by you or your browser. We use cookies to ensure that we give you the best experience on our website. If you continue to use this site we will assume that you are happy with it.OkRead more