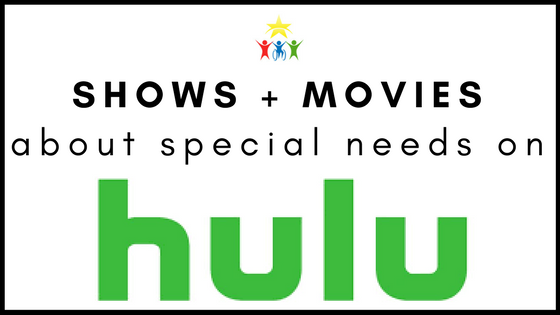 A little wh­ile ago we did a blog over Netflix shows and movies that featured special needs. We had a lot of fun making it so we decided to the same with HULU.

A few things to note: The information we listed underneath the trailer is taken straight from a combination of IMDB, Rotten Tomatoes and Netflix itself.

As with Netflix, Hulu also changes out its movies and shows from time to time, so if you are reading this post a while after it has been posted, you may not be able to find the media listed below. However, if it is a HULU original, it will be there.

We’re also very surprised at the number of features we found working on this post. When we started we expected to find around five, but we found an astounding 18.

Synopsis: "28 year old Enea is looking for love - physical love that is. But as the autist he is, living in Italy, this is anything but easy. So he and his best friends Carlo and Alex set out on a journey through Europe and eventually find a lot more than they are looking for."

A foreign documentary, you can now view the perception of Autism in Italy. But, we believe watching lovable Enea on his quest for "physical love" will be both interesting and enjoyable.

Synopsis: "Shaun Murphy, a young surgeon with autism and Savant syndrome, is recruited into the surgical unit of a prestigious hospital."

Savants are people who have intellectual disabilities but also exhibit a great amount of intelligence. Watch a young man with Autism, who has a medical doctorate but must continue to fight for respect. Hospital shows are some of the most addictive out there, which can be a pain because HULU does not have all the episodes up for streaming at the is time.

Synopsis: "A young woman with Asperger's tries to find her first boyfriend with a little help from her older sister."

A love story that deals with love between a woman with Asperger’s and a man who is neurotypical. Will society accept their relationship for what it is? What will people say? Find out with this sweet, moving film.

Synopsis: "Larry has Down's, Sophie has epilepsy, in a world that conspires to keep them apart, will love triumph?"

An Irish film, Sanctuary may be the greatest romantic comedy that no one has never heard of. 100 percent on rotten tomatoes is no easy task even for films with little coverage. It will make you laugh out loud, feel butterflies and maybe, just maybe, make you cry.

Like many other disabilities, dwarfism is one that struggles with the image and representation.

Comedian Brad Williams will leave you on the floor laughing and probably feeling a little guilty about it.

Maybe Deafness isn’t the best way to sum up the following movie. We’d prefer to think of it as a film for all disabilities.

Maturity Rating: R (for language including sexual references, and some drug content)

Synopsis: "The true story of Richard Pimentel, a brilliant public speaker with a troubled past, who returns from Vietnam severely hearing-impaired and finds a new purpose in his landmark efforts on the behalf of Americans with disabilities."

The must-see on this list. A biographical kindhearted portrayal of Richard Pimental who was fundamental in creating American Disabilities Act. Another disability showcased is cerebral palsy which Richard’s friend Art has.

One of the shortest lists on this blog but maybe one of the best. We are happy to see this disability get a great a show to represent it. If you’d like to learn more about Cerebral Palsy click this link.

Maturity Rating: R (for language including sexual references, and some drug content)

Synopsis: "The family of a special-needs teen is good at dealing with the challenges he faces - and excellent at creating new ones."

A hilarious sit-com that does not need a laugh track. We want to stress that this show is by no means a “token” disability show, and the humor carries the show itself. What we enjoy most is that the humor normalizes cerebral palsy and is in no way mean-spirited. Cerebral palsy is highly underrepresented in the film and television. We could only find one show on Hulu that deals with cerebral palsy, and we’re glad this is it.

Note: Only season 2 is on Hulu, but don’t let that stop you.

We could only find one film dealing with blindness, so we hope you like Alec Baldwin and Demi Moore.

Also, speaking of blindness: Hulu was recently sued for not providing audio tracks allowing people who suffer from blindness to enjoy Hulu, you can read about it here.

Synopsis: "A novelist blinded in a car crash which killed his wife rediscovers his passion for both life and writing when he embarks on an affair with the neglected wife of an indicted businessman."

Under-appreciated, this not so well-known film stars the well-known Alec Baldwin and Demi Moore. Critics did not show it too much love, saying it was full of cliches, but if you already have a Hulu subscription there’s nothing to lose.

We found a few films that have strokes being a major plot-point in the film, one heart-warming, another dramatic and one humorous. One thing to note about this list is that it showcases different levels of severity in strokes. One character loses control in his entire body aside from eye movement, while another has a limp and a speech problem. For more information about stroke victims, follow this link.

Synopsis: "An old man makes a long journey by lawnmower to mend his relationship with an ill brother."

OK, so the stroke may not be apparent in the film but is a driving force behind the plot. We hesitated to put it on the list, but critics loved it, and it is a true story. We think everyone will get something out of it. It’s great for the whole family.

The Diving Bell and the Butterfly (2007)

Maturity Rating: PG-13 (for nudity, sexual content and some language)

Synopsis: "The true story of Elle editor Jean-Dominique Bauby who suffers a stroke and has to live with an almost totally paralyzed body; only his left eye isn't paralyzed."

The trailer above does not give too much information, so we’ll fill in the blanks here: Based on the autobiography of the same name, The Diving Bell and the Butterfly follows Jean-Dominique as a stroke leaves him almost completely paralyzed. This event brings together his loved ones while he learns to communicate using only his eye. Jean-Dominique lives up to making the best of situation.

Synopsis: "An ultraconservative police officer suffers a debilitating stroke and is assigned to a rehabilitative program that includes singing lessons, with the drag queen next door."

Robert De Niro fans, rejoice! He's on this list! Although this isn't necessarily one of his most known films. After suffering stroke, De Niro's character not only has to overcome the stroke, but also his own apprehension of the gay community. It is funny, and you can learn about the drag world while learning a little about strokes too.

Not all of us can control what we see on our televisions. Most of us don't have the skills to make movies with characters and actors with special needs. But we can all help in our own way.

Even if you could only donate as little as $10, you'd be supporting an organization that building confidence in children and adults with special needs, so that one day they might be on the big screen. Donating $10 is as easy as watching a film on Hulu. It could mean a world of happiness for one of our students.

Register as a Volunteer

If you are local in the Dallas-Fort Worth area, you can register as a volunteer with Achievement Center of Texas. We are eager for more help and are willing to accommodate­­­­­ your schedule. Let us know what your interests are, and we'll put you on a role that simultaneously builds your skills and helps our students.

Charlie Haskell is a student at UNT. He’s a huge DC comics reader and has a guilty pleasure of campy film. He is volunteering as a blogger because he saw the opportunity to help those that couldn’t help themselves. You can find more information about Charlie at his website www.beardedjustis.com.

Shows and Movies about Special Needs on Hulu